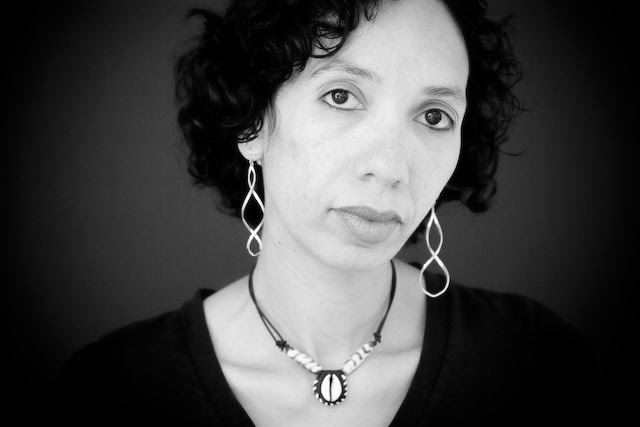 JP Howard aka Juliet P. Howard curates and nurtures Women Writers in Bloom Poetry Salon (WWBPS). JP's debut poetry collection SAY/MIRROR is forthcoming from The Operating System Press in early 2015.  JP was awarded her first Brooklyn Arts Council Community Arts Fund Grant in 2014 on behalf of the Brooklyn-based portion of the Salon series. WWBPS was one of four literary organizations in 2014 whose members were invited to participate in Poets & Writers fifth annual Connecting Cultures Reading, which was a true honor for the Salon and members.  Poets & Writers provides ongoing support to the Salon's featured poets. Photo credit: Rachel Eliza Griffiths

JP is a poet, Cave Canem graduate fellow, original member of The Hot Poets Collective and native New Yorker. WWBPS is a forum offering women writers at all levels a venue to come together in a positive and supportive space. WWBPS hosts monthly literary salons throughout NY and the blog accepts submissions of poetry.  JP has curated and nurtured the salon solo since early 2012. JP is a 2014 VONA/Voices Workshop (poetry) at the University of California at Berkeley. JP was selected as a 2012 and 2011 Lambda Literary Foundation Emerging LGBT Voices Fellow, as well as a Cave Canem 2011 Fellow in Residence at the Virginia Center for the Creative Arts. JP was selected as a 2009-2010 finalist in the poetry category by the Lesbian Writer's Fund of Astraea Lesbian Foundation for Justice. She was also the recipient of a Soul Mountain Retreat writing residency in 2010. Her poems have been published in Nepantla A Journal for Queer Poets of Color from Lambda Literary Foundation, Adrienne A Poetry Journal for Queer Women (Sibling Rivalry Press), Kweli Journal,  African Voices Magazine, The Wide Shore A Journal of Global Women's Poetry, MiPOesias iPad Companion, iARTistas,  "Of Fire, Of Iron" (debut collection of The Hot Poets Collective published 2012), The Best American Poetry Blog,  Lambda Literary Foundation 2012 (video),  Talking Writing, Connotation Press (interview & poems), Muzzle Magazine with audio, The September 11th Memorial Poetry Project of The Brooklyn Arts Council, TORCH Literary Journal, The Mom Egg 2013 & 2012, The Portable Lower East Side (Queer City), Queer Convention: A Chapbook of Fierce, Promethean Literary Journal, Cave Canem Anthology XII: Poems 2008-2009, Cave Canem XI 2007 Anthology and Poetry in Performance. She was awarded an MFA in Creative Writing from the City College of New York and holds a BA from Barnard College.

JP uses her creativity and poetic background, including her MFA in Creative Writing, to foster a Salon forum that recognizes, celebrates and addresses the needs of women writers and all creative souls from diverse backgrounds and writing levels. The Salon serves multiple purposes, including educational, social, and creative and literal nourishment. JP has recently expanded the Salon's presence nationally by hosting a Salon in 2014 in Seattle, Washington and at The Univeristy of California at Berkeley during VONA/Voices Workshop for Writers of Color. The Salon has had a presence both at The Association of Writers and Writing Programs (AWP) and at The Brooklyn Book Festival. JP participated in the inaugural Out of the Binders: Symposium on Women Writers Today at NYU in October 2014. JP was on the panel "If You Build It, They Will Come" which featured women in the writing community who are agents of change. JP  participated on an AWP Panel in Seattle, WA in February 2014 representing the Salon. In this AWP Panel "The Write to Network: Women Writers Empowering Women," JP joined four women in the writing industry, who were from diverse segments of the country, cultural backgrounds, and literary affiliations and discussed the ways in which women writers, editors, and publishers are networking to help promote and empower women writers across the publishing industry, from women-empowering virtual gatherings and poetry salons to chain reading series and grassroots community.

Promote Your Page Too

Please email your poems or artwork to womenwritersbloom@gmail.com & we will plant poems in the Poetry Garden or post art in The Art Shed! Submission guidelines below.

THANK YOU to all the wonderful and talented women poets who submitted their work to WWBPS for consideration in our debut poetry Anthology. Submissions are now closed. We received a large number of submissions for review! We are excited about this opportunity that the Salon will be able to provide, showcasing the work of women poets whose voices need to be heard! Extra special thanks to Clique Calm Books, Inc. and its founder, Gladys E. Perez-Bashier who has agreed to publish Women Writers in Bloom Poetry Salon's Debut Poetry Anthology! WWBPS anticipates the subsequent review, selection and publication process will be lengthy. Updates, when available, will be posted on the blog, in our monthly newsletters and on our Facebook page. Anthology inquiries should be directed to:WWBPS.Anthology@gmail.com. Please click the following Facebook link and "Like" our page to stay updated:https://www.facebook.com/WomenWritersinBloom.PoetrySalon

-"The Poetry Garden" is designated for and limited solely to poetry. Email all submissions, maximum of two pages in length, to womenwritersbloom@gmail.com, 100 word max bio and author photo with "The Garden" in the subject line. No previously published work will be accepted.

-"The Art Shed" submission guidelines same as for print, except that art submitted must be in jpeg format. Email submissions to: womenwritersbloom@gmail.com with
"Art Shed" in the subject line.

-Contributors Page is where you can locate WWBPS contributor biographical information.

WWBPS always reserves the right to reject any submissions which don't fit our recommended guidelines.

January 2013 WWBPS co-founder JP Howard interviewed by Jordan Galloway of Brooklyn Based for the article "Seen and Heard, the Literary Salon Scene"

WWBPS is featured in Her Circle Ezine's Up close interview. You can read it here:
http://www.hercircleezine.com/2011/11/21/women-writers-in-bloom-poetry-salon/

Poems published in the year of 2011 on this website have been redirected to our new Archives Page.